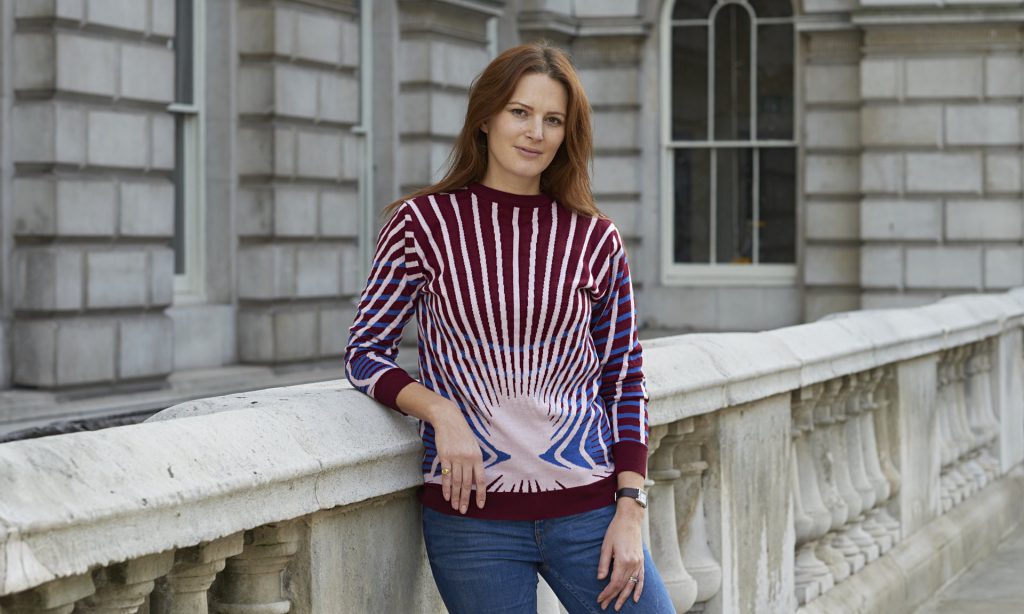 There are a mere handful of shopping days left until the festive season and the supermarket is already playing Noddy Holder. This is nature’s way of telling you it’s time to start thinking about your Christmas jumper.

For decades, a Christmas jumper has been an exercise in naffness. Think Colin Firth as Mark Darcy in the film adaptation of Bridget Jones’s Diary, resplendent in a knitted reindeer. Think Gyles Brandreth in the 1980s. Think grim Danish detective series, with added tinsel.

But help is at hand for the fashion-conscious festive sartorialist thanks to Knyttan, a small design studio based in London’s Somerset House. Knyttan enables you to design your own jumper, dress or scarf made from 100% Merino wool that will be knocked up on an industrial knitting machine in a matter of hours.

I went somewhat trepidatiously. The last thing I manufactured on my own was a jewellery box in Craft Design and Technology that I covered in cheap pink material, with cutout scarlet hearts, despite my mother warning me that pink and red never go together (she was right).

Luckily, the clever people at Knyttan have constructed an easy-to-use website already uploaded with a selection of graphics. These can be manipulated onscreen to come up with your own unique design. I opted for the “Deformable Grid”, which sounds scarier than it is. I then chose my colour palette – maroon, blue and pink – and played around with the pattern, swiping and pinching my fingers on the touch-screen to warp and stretch the lines. After a few minutes, the Grid had been well and truly Deformed.

The result was certainly striking, the kind of thing one could imagine being drawn by a drunk, space-age giant squid. But I was happy with it. I left Somerset House eagerly awaiting the delivery of my bespoke jumper the next morning, confident in the knowledge that there wouldn’t be anyone else alive wearing this particular knitted beauty around the Christmas tree.

Knyttan is the brainchild of Ben Alun-Jones, Kirsty Emery and Hal Watts, three bright young things in their 20s who met while studying at the Royal College of Art. “The idea is to democratise fashion,” says Alun-Jones, 27, who has a background in mechanical engineering. “It’s like a 3D printer for clothes and gives each consumer a strong, individual connection with their garment. It’s the opposite of fast fashion. It means something to someone who created it.”

Unlike most novelty jumpers, the quality of a Knyttan garment is extremely high. Each item is produced on the same kind of knitting machine used by mainstream designers such as Burberry and Benetton. When I got my jumper, I was impressed by the smoothness of the wool: no scratchy chunkiness or stray mohair strands to get stuck in the throat as you’re eating your roast turkey. It fitted well and came with a personalised label that stated “Made with Elizabeth Day” alongside the date, location and sample number.

As yet, there is no option for a cheery reindeer design. But I’m sure Knyttan are working on it.

05
Mar 2017
By Heike WuttigKnitting, KnitwearComments Off on Knock-out knitwear without a stitch of work