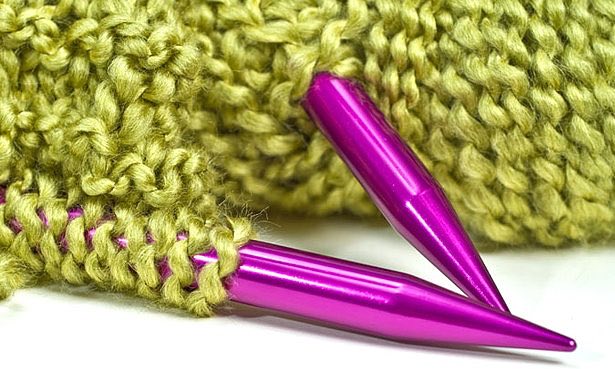 Knitting is no longer the cheaper option, says the Invisible Woman in her lovely, nostalgic piece this week about the Fashion and Textile Museum’s new knitwear exhibition. Well, if you’re trying to pay the least possible for a piece of clothing, the high street can sell you a machine-knitted jumper for under a tenner. But if you’d like the satisfaction of making your own, you needn’t spend much more than £25. And that would be for 100% British wool, grown, spun, dyed and sold in this country. My latest handknit, a cardigan, cost me £12 in wool direct from the working mills at the Welsh National Wool Museum – the buttons, from a local craft shop, were nearly as much.

A common misconception about knitting (and crocheting) today is that it is an expensive hobby, best left to those who are well-off in terms of money and spare time. If you have the budget, you could of course spend £100 making a jumper from luxury blends of cashmere and silk. Use possum or yak and you could double, even treble, that price tag (though even then it would be cheaper than a designer knit).

But that is not the full picture. Whether you are choosing machine-washable acrylics (still very much for sale in many chemists, pound shops and indoor markets around the country, let alone haberdasheries, wool shops or big chains such as Hobbycraft) or pure wool, you can easily make the kind of “portable hug” that the Invisible Woman speaks so movingly about.

And while you’re at it, you could make sure the affordable yarn you choose supports the British wool industry, which is re-entering the market from all directions – from Harris tweed on the catwalk to wool insulation in your roof – and is being celebrated during Wool Week (5-12 October). Over to Louise Scollay of the KnitBritish blog, which has been at the forefront of promoting affordable, British wool.

“When I look at my blog stats, I am often surprised by some of the search terms that lead people to my blog – often phrases such as ‘Why is British wool so expensive?’ ‘Where can I find cheap British wool?’ British wool yarn isn’t a high-priced, rare product that you need to seek out from specialist sellers. Even commercial yarn companies, such as Wendy and King Cole, are recognising that there is a wealth of wool in the UK and knitters want to use it. Wendy Ramsdale, a masham wool that carries the British wool mark, was launched recently. It is available widely through online shops and general craft stores,priced at just over £3. It illustrates that yarn companies are aware how discerning knitters are when it comes to the wool they buy, and also the kind of budgets people have.”

Though there may not be the same culture of knitting as there was during the make-do-and-mend heyday, it has been transformed by the advent of Ravelry, a social site for knitters, crocheters and weavers, which provides a place to share and talk about your craft, and to learn from others, wherever they are in the world. With nearly 4.5 million Ravellers, that could be anywhere from Azerbaijan to round the corner. The site can also be a democratic platform for knitwear designers: create a great pattern, ask willing knitters to test it, and begin a new career that could lead you into the Fashion and Textile Museum by a different route.

I would love to take the Invisible Woman to a knitting group or a wool festival and show her all the knitters out there. Knitting is a craft loved and practised by millions. And if she continues with her rediscovered hobby, I hope she tries some inexpensive British wool for her next new project.