Cutting-edge knitting: is this the future of textiles?
How to knit a penguin jumper (whether they need it or not) 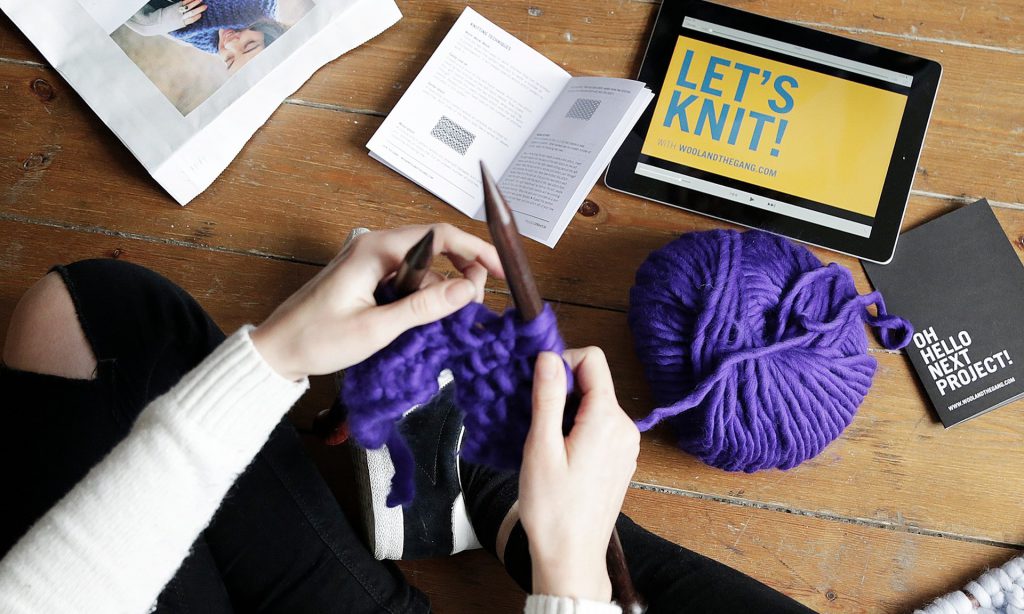 I am in one of the subterranean rooms that form part of the backstage rabbit warren of Somerset House in central London. This wing used to be offices for the Inland Revenue, but it is now occupied by Makerversity, a hive of young business start-ups which get to rent desk space at affordable prices. One of these businesses has just moved out of the Makerversity incubator into its own bigger space a few doors along. A workman is carrying a window through the room. It is being put back in place after it had been removed to allow access for three industrial knitting machines. This is the headquarters of Unmade, where old-fashioned knitting meets cutting-edge technology.

“We’ve got physicists, computer scientists, a user-experience expert,” says Ben Alun-Jones, one of the three founders of Unmade, which uses coding to power knitting machines as though they are 3D printers. He met Hal Watts and Kirsty Emery when they were all at the Royal College of Art. Alun-Jones and Watts did industrial design and Emery specialised in knitwear. They had an idea to apply what they knew about 3D printing to the 1980s computer-programmed knitting machine. “They can be used to make something that is useful rather than making just anything,” he says. “You press a button and a garment comes out.” It’s a far cry from the knit-and-natter sessions that were the last big knitting craze.

By enabling people – and brands – to “print” clothes to order, the whole process of clothing manufacture can be reconfigured. Unmade will never produce anything that nobody wants. It is estimated that 10% of all the clothes made in the world go straight to landfill, which, says Alun-Jones, is “insane”. “We seem to have lost something in mass production where you are making things for everyone, but everything is made for no one.”

Wool and the Gang (WATG), another technology-enabled knitwear company, would agree. The east London-based brand which specialises in hand knits – either ready knitted or in kit form to knit yourself – has just unleashed the power of its online community to raise an extraordinary £1m of funding via the micro-investment website Crowdcube.

The money will be used to grow WATG’s business in America. “The majority of our makers are in Europe and the UK, and we have a lot of people waiting to get on production in the US,” says CEO Lisa Rodwell. “It doesn’t need to be a big operation – we have proved how to do it here so it would be replicating that in the US.” The Dalston HQ employs 23 permanent staff, with extra part-timers helping with packing around the busy Christmas period (gifting is a huge part of their business).

Like Unmade, WATG has disrupted the way fashion is produced. The company has a “gang” of more than 3,000 makers – a global paid network of casual knitters, mostly women, who use WATG to generate additional income. So in February 2014, for instance, when Giles Deacon needed 250 knitted beanies to give to his London Fashion Week audience, WATG was able to produce them in just two weeks. Cara Delevingne loved her hat so much she videoed herself on the catwalk wearing it to the delight of her millions of Instagram followers (and proceeded to knit one herself). For this season, the gang made knits for the London-based designer Christopher Raeburn, including a shark-finned mitten called the Bruce Knitmitt (£99 readymade or £49 if you buy the DIY kit for advanced knitters).

“We starting discussing the idea of crowdfunding about six months ago,” Rodwell tells me. The brand’s co-founders, Aurelie Popper and Jade Harwood, both fashion and textiles graduates from Central Saint Martins, were confident that their community would want to help finance them. And 521 of them invested. “It’s been quite exciting,” says Rodwell. “We’ve had so many of our customers come in and it’s more the pledge of support.”

In 2014 the business grew 320% on 2013 and this year WATG expects to double that. The company ships to almost 70 countries and has strong growth in America, Australia and South Korea, including two department stores where people can go into the store and knit.

The WATG community share their knit and crochet creations via social media, host knitting parties for friends using WATG knitting kits, learn how to knit via the brilliant brand’s videos – everything from how to cast on to much more advanced stitches – and even help shape the product via regular “Gang Labs”, where they are invited to suggest their own designs. While this is a business built on the most basic, low-tech craft there is – nothing more than wooden sticks and balls of wool – it has grown into a global brand with people signing up for parties from the King’s Arms in Salford (where you could knit a snood in their chunky Crazy Sexy Wool) to the Little Knittery in Los Angeles.

It has grown into a global brand, with parties from the King’s Arms in Salford to the Little Knittery in LA

WATG has grown up with social media. In 2008 they had the idea to post “how to” videos on YouTube and their community grew from there. “People discovered the brand as they were trying to learn to knit or to cast off or to fix their mistakes, and connected with us,” says Rodwell. “As both Facebook and Instagram took off our customers started sharing pictures of what they were making. Everybody loves to share a picture of their coffee in the morning and fashion makers love to share a picture of them drinking a cup of coffee making or wearing their latest snood.”

While WATG is all about the wild and woolly and the handmade, Unmade is about a slicker, more industrial process. But the two businesses both understand the importance of the collaborative and social aspect of creating fashion. “I think most innovative businesses today have technology as an enabler and that is the role for WATG – it’s an enabler,” says Rodwell. “We wouldn’t have been able to find a network of knitters all over the world without the internet or be able to manage quality control without the internet. We are in the fashion-making DIY business that exists thanks to the internet.”

Similarly for Unmade, the journey starts with the user. Nothing is made unless it has been ordered. The Unmade team have cracked a whole new way of producing small quantities of knitwear with endless applications. With their software, they could potentially connect to every factory in the world, making their production more efficient, and enabling any brand to create unique product as ordered by its customers.

“Knitting is the future of textiles,” says Alun-Jones. “All the things people dream of doing with 3D printers is one of the oldest things going.” Unmade is talking to designers who are interested in collaborating with them – not only in sampling their knitwear for their own production but also in creating one-off pieces that their customers will be able to order online – and within minutes of them appearing on the catwalk at next season’s London Fashion Week.

“We are building a completely new experience for the customer where you can be part of the creation process. We have made our own file format that is like an MP3 is to music – we have created a .KNIT which is a file format for knitting,” says Alun-Jones. This file format talks to a piece of technology that they have built into the knitting machine, and generates the code to knit a garment.

Unmade started their business (which they originally called Knyttan) in 2013. This summer, they raised £2m in funding, which has enabled them to expand their team to around 22 (14 are fulltime) and to steam ahead with their knitting revolution. They are building a website that will encourage the customer to be part of the creative process. One of their first collaborations is (like WATG) with Christopher Raeburn. His collection for men for S/S16 was inspired by Borneo and his Unmade knitwear designs feature an abstract version of a topographical map of the country. On the Unmade website, you will be able to move the map around a template of your sweater and select which bit of the map you want to be placed where, and in what colour. Your jumper will be unique to you.

You play around with your design and, at the click of a mouse, a knitting machine knits your jumper

This month Unmade launches its website and open its first pop-up shop in Covent Garden. It will be there until Christmas. There will be a knitting machine, samples to try on and a screen where you can play around with your design and, at the click of a mouse, the instore knitting machine will knit your jumper or scarf. Depending on how many other garments are in the “printer” queue, you will be able to take away your finished item or it will be sent to you a day or so later. “Ultimately we are trying to create the highest personalised garment you can have,” says Alun-Jones.

A one-off garment does, of course, come at a price: around £60 for a merino scarf and £120 for a jumper. But for Alun-Jones this is only the beginning. “Imagine a place where a more appropriate, better use of resources makes things that people want and are involved in. You want to own it and it’s something to be proud of. Knitting is amazing.”